Now that the funeral, moving out of the apartment, and all of that is behind me, I’ve been focusing on this new chapter of my life.  Trying to be social and do things with friends and go do more independent things. It’s kind of scary because I’m kind of socially awkward and I’m used to having someone with me that I can attach myself to.  It’s hard but I started working on that when I started going to the Disney club and I know the more I go to things the easier it’ll be for me. At least I hope so. And I do enjoy spending time with friends and doing things but I’m worried that awkwardness won’t ever go away.

This weekend I’m going to San Francisco to the Generation Beauty convention that is hosted by IPSY that monthly makeup subscription.  There will be a lot of YouTube creators and makeup/beauty companies and I’ve been looking forward to this since we got tickets. I’m going with Gina’s sisters and their best friend so it’ll be my first ever girls weekend. I know… Sad that I didn’t have that until I turned 34 but as I said, social awkward, and I always wanted to spend time with my family. It’s just what we did.

Anyway, I also think I’m going to lean a different way with the blog too. I’m reading a book on PCOS and it’s giving me new motivation to actually take care of the symptoms associated with PCOS and I’ll talk about that later.  My computer’s not working at the moment so I’m not able to post at home so I have to wait until my breaks at work to get something out and that time is coming to an end. I’ll be sharing what I got at the event soon and thinking up other things to write about.

July 18th was my 31st birthday.  I still can’t believe I’m supposed to be a responsible adult.  When did all of this happen? It’s weird.  Anyway, I took the day off to go to the Walt Disney Family Museum with my mom and two of my oldest and best friends in the whole world!  I haven’t seen them much over the years and I hope I can change that because we have a lot of history together.  Our mothers were best friends and I practically lived at their house during the Summer.  We took quite a few trips together too, especially to Lake Tahoe.  Lots and lots of history! 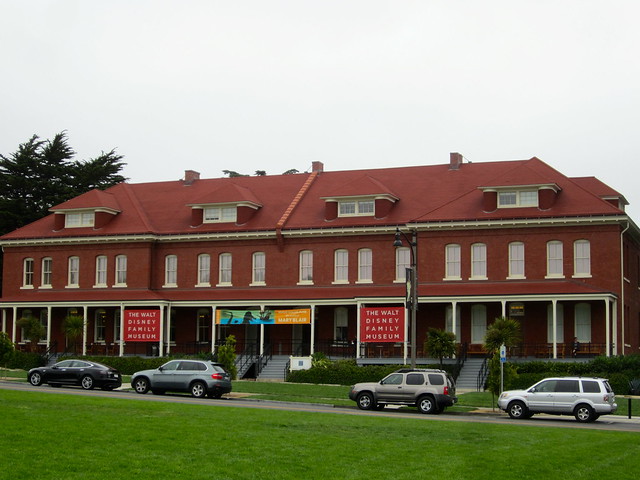 Anyway, I specifically wanted to go to the museum because at the moment they have a special exhibit on Mary Blair.  I am a big fan of her work and I was really excited that they let you take pictures there now too (except where it says not to) and I will go into that whole day trip on my Disney blog and link to it when I have it posted.

As I said, it was so great to catch up with my friends and at the moment anyway we are keeping in touch so I’m really hoping that we won’t let another 10+ years go by without communicating.  They were the sisters I never had and we’ve all been through quite a bit together.

Saturday, I continued my “birthday weekend” by attending the July meeting for my Disney group (another post on my Disney blog that will be up after the day trip to the museum) and I met up with my brother and soon to be sister-in-law (1 week away!) while the boys got haircuts then we went to our respective homes to rest for a minute, and met back up for dinner at Johnny Garlic’s which is owned by Guy Fieri. 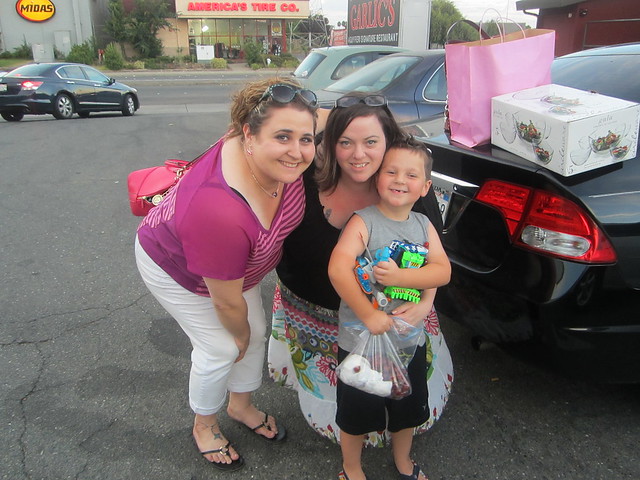 The food was really good and Nick even braved ordering “Hunter’s Special” (Hunter is Guy’s son) at the moment which was Alligator Jambalaya.  I had a bite of it and taste wise it wasn’t bad.  Pretty mild but a little chewy.  I wouldn’t order it personally but I’m glad I can now say I’ve tried gator! I had shrimp scampi which was a little bland compared to everyone else’s food but I’d go back for special occasions. 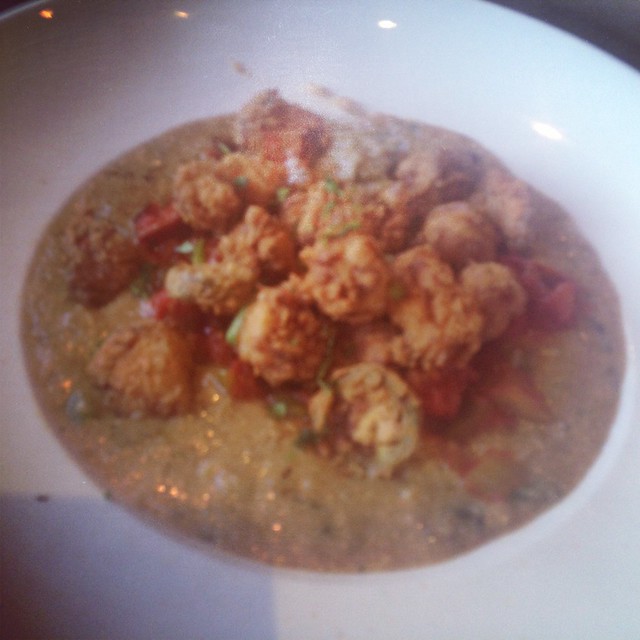 The little guy is obsessed with taking selfless right now and he wanted to take one with me (after taking over 250 on his mother’s phone and I’m not even exaggerating!) 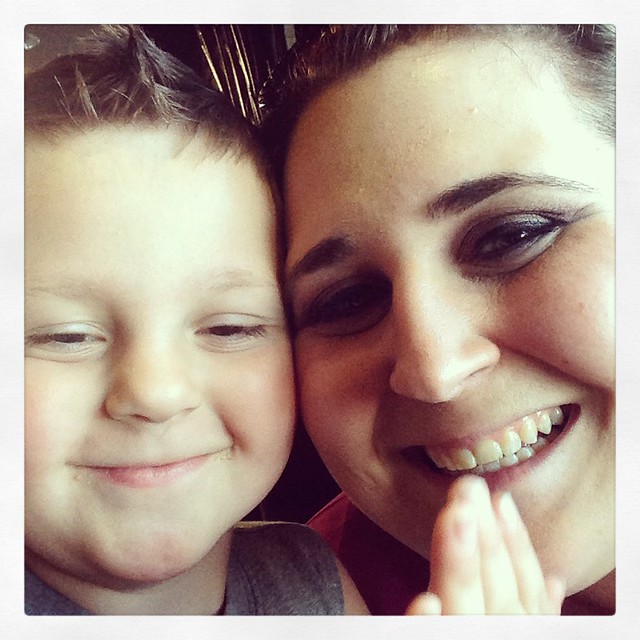 After that, we went to the mall nearby quickly so the Little Bug could go on the carousel a couple of times. 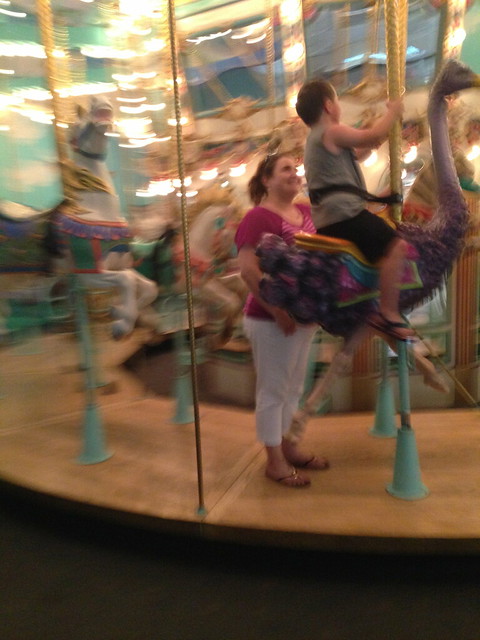 We had to go through Nordstrom to get back to our car and I needed red lipstick for my upcoming and since I kind of like the way it looks on me (even though I’m still kind of self-conscious with it on, but if I wear it to special occasions it will hopefully help me with that.) What do you think? 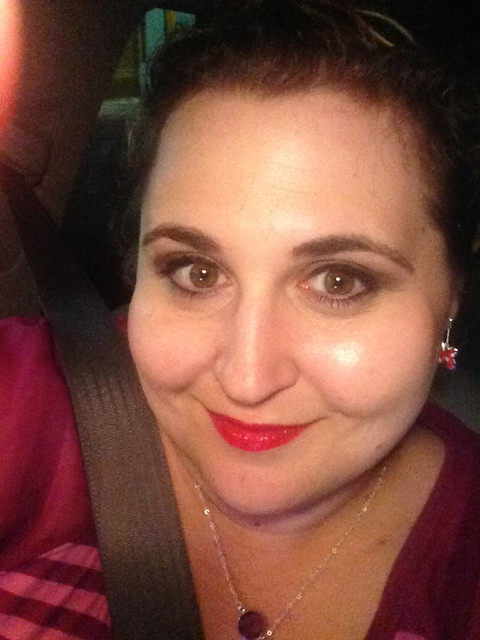 Then went over to Farrel’s for ice cream and I made the mistake of telling them it was my birthday!  They go ALL out there! I was mortified! Gina insisted on taking a video and they made me make bird noises.  That’s nothing compared to a friend of mine that had to hip-hop dance! At least I got a free sundae out of the deal! 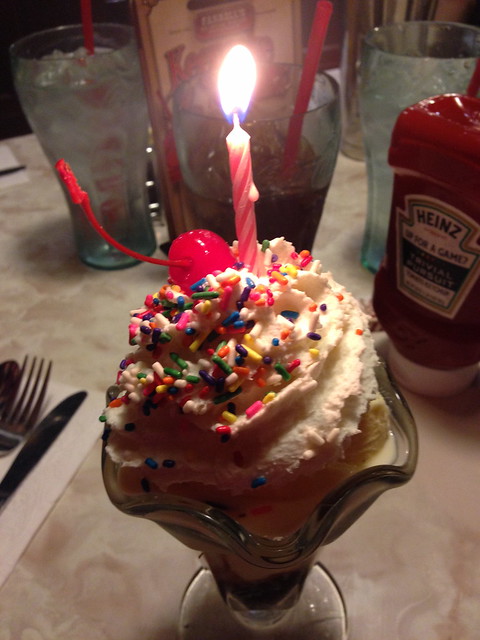 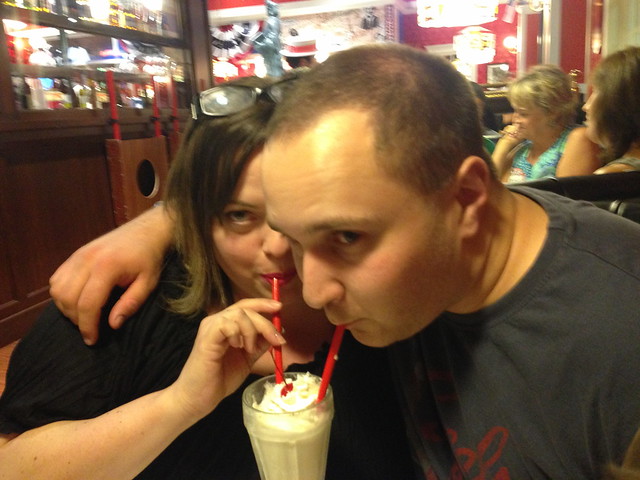 My mom got Little Nick a styrofoam hat that the waiters wear. 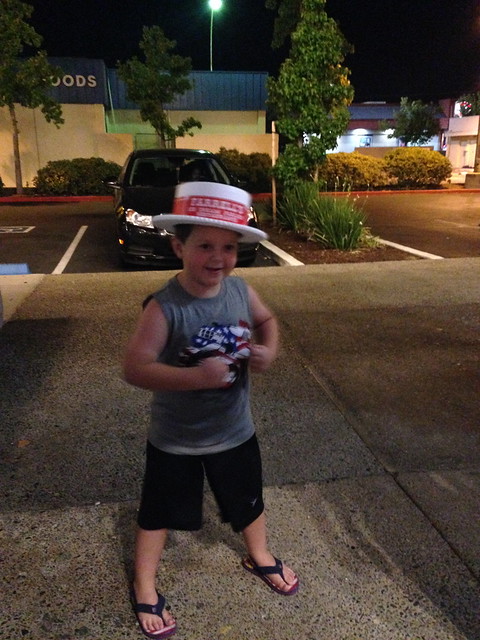 Sunday, I slept my butt in and got some errands done for the week, and went to the Crocker Art Museum for “Pay What You Wish Day” which is every 3rd Sunday.  They had a special quilt exhibit which was sort of cool to see how detailed they were.  Most were from the 1850s and all hand stitched so you can imagine how long they took to make.

This is the old original part of the Crocker Art Museum. 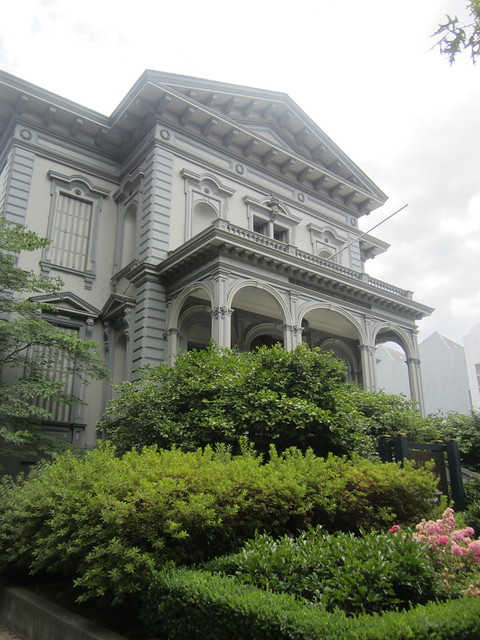 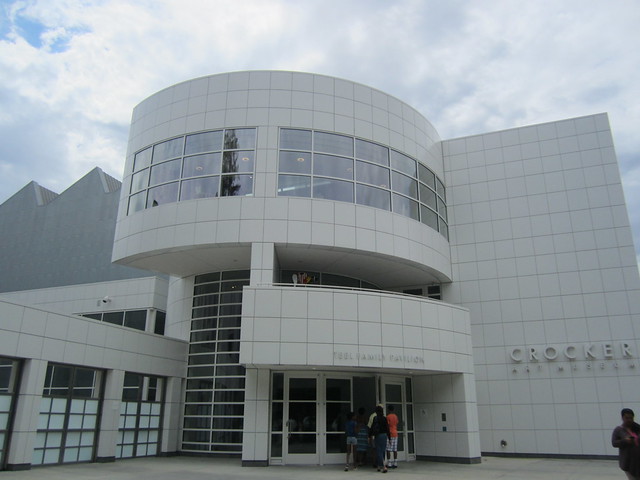 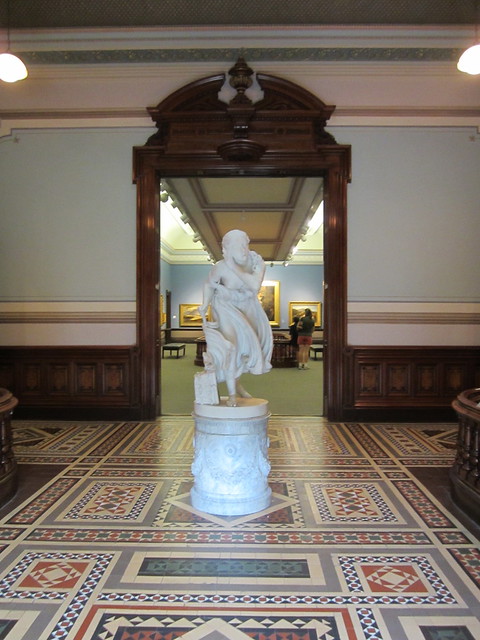 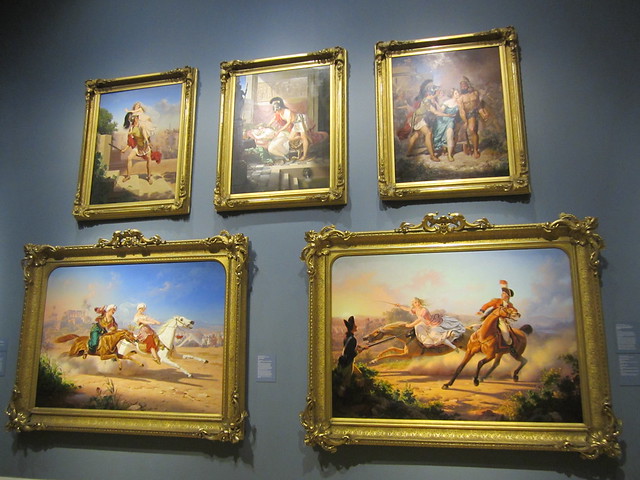 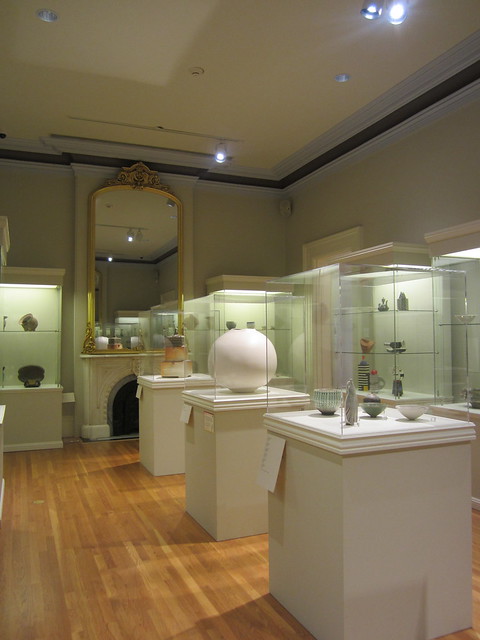 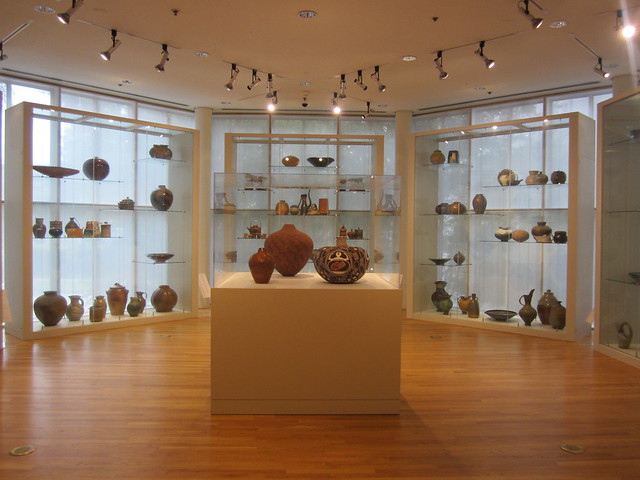 That about wraps up my birthday weekend.  I had a lot of fun and I hope this year will be a good one…  I also am going to make more of an effort than I have been lately with posting here.  I am making a plan for at least once or twice a week to get something out so keep checking back!

Before I got sick, I was in the Bay Area visiting my mom and Nick.  My aunt came up from Fresno to go to Britex Fabric Store in Union Square and have a quick visit with my uncle so we tagged along with her on Saturday.  Keep in mind that The 49ers were playing their Division Championship against the Saints IN SF so we took a detour to avoid that area of the city since everybody and their mother was going to be on the road to get there!

We had a nice time walking around the city for a bit, then headed over to my uncle’s home to watch at bit of the game.  We left just before half time to get my aunt back to her car so she could head back home before it got too dark.

Then I half watched the rest of the game at home with my mom and Nick, and by half watch I mean I kept leaving the room because it was getting too stressful to watch!  It was a great game though and we won!!! Too bad we didn’t win yesterday’s game which I watched at home with my 49ers blanket…

It got close though!  I’m still bummed about it though.  I know I don’t talk about sports that often (actually never) but I’m a big Niners and SF Giants fan!  My dad raised me so!

So since I don’t have much else to report, I thought I’d do another of All The Weigh’s Friend Making Monday Posts.  If you have a blog and want to participate, remember to leave a link under her comments page for this week’s FMM! (I linked to that particular post if you want to leave your link!)

Okay that’s it from me for tonight!  Time for Being Human!

Happy Friday!  I don’t know if it’s my B 12 supplement or what but today’s feelin’ pretty good!  Especially considering it’s Friday the 13th! I don’t find it bad luck.  My dad was born on a Friday the 13th so it can’t be that bad!

Anyway, the top ten this week (which was inspired because I’m off to go there tomorrow with my mom and aunt) is my favorite places in beautiful San Francisco!  I grew up just south of the city but moved away six years ago.  We spent time there on special occasions, but it is one of my favorite places to visit.  It’s such a quirky and original city.

Well, I hope you learned something from this post!  If you plan on visiting San Francisco, please let me know if you went to any of these places! Have a great weekend!